The Making of a Poem: A Norton Anthology of Poetic Forms 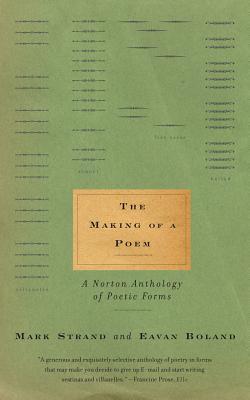 Explaining beauty is hard work. But distinguished poets Mark Strand and Eavan Boland have produced a clear, super-helpful book that unravels part of the mystery of great poems through an engaging exploration of poetic structure. Strand and Boland begin by promising to "look squarely at some of the headaches" of poetic form: the building blocks of poetry. The Making of a Poem gradually cures many of those headaches.

Strand, who's won the Pulitzer Prize and a MacArthur Fellowship and has served as U.S. Poet Laureate, and Boland, an abundantly talented Irish poet who has also written a beautiful book of essays on writing and womanhood, are both accustomed to teaching. Strand, now at the University of Chicago, and Boland, a Stanford professor, draw upon decades in the classroom to anticipate most questions.

Ever wonder what a pantoum is? A villanelle? A sestina? With humor, patience, and personal anecdotes, Strand and Boland offer answers. But the way they answer is what makes this book stand out. The forms are divided into three overarching categories: metrical forms, shaping forms, and open forms. "Metrical forms" include the sonnet, pantoum, and heroic couplet. "Shaping forms" explains broader categories, like the elegy, ode, and pastoral poem. And "open forms" offers new takes on the traditional blueprints, exploring poems like Allen Ginsberg's "America."

Each established form is then approached in three ways, followed by several pages of outstanding poems in that form. First, the editors offer a "page at a glance" guide, with five or six characteristics of that specific form presented in a brief outline. For example, the pantoum is defined like this:

1) Each pantoum stanza must be four lines long.
2) The length is unspecified but the pantoum must begin and end with the
same line.
3) The second and fourth lines of the first quatrain become the first and third line of the next, and so on with succeeding quatrains.
4) The rhyming of each quatrain is abab.
5) The final quatrain changes this pattern.
6) In the final quatrain the unrepeated first and third lines are used
in reverse as second and fourth lines.

With this outline, it's easy to identify the looping pantoum. In the second piece of the pantoum section, Strand and Boland include a "History of the Form" section, again condensed to one page. Here, we learn that the pantoum is "Malayan in origin and came into English, as so many other strict forms have, through France." Indeed, both Victor Hugo and Charles Baudelaire tried their hands at the pantoum. As always, Strand and Boland offer some comparison to the other forms, which helps explain why a poet might choose to write a pantoum over, say, a sonnet or a sestina:

"Of all verse forms the pantoum is the slowest. The reader takes four steps forward, then two steps back. It is the perfect form for the evocation of a past time."

Next, the editors include "The Contemporary Context," which introduces several of the pantoums of this century. Finally, in what may be the book's best feature, they provide a close-up of a pantoum, an approach they repeat for each form discussed. In this case, it's the "Pantoum of the Great Depression" by Donald Justice. The editors offer some biographical information on Justice, and then they map out how that specific poem gets its power.

This "poet's explanation" of the workings of a poem is invaluable, especially when it comes from leading poets such as Stand and Boland. What's more, these remarks are transferable. Reading how Strand and Boland view a dozen poems transforms the way one reads. With any future poem, you can look for what Strand and Boland have found in the greats.

The editors offer their readers a great start, with a list for further reading and a helpful glossary. If anything can get a person excited about poetry, this selection of poems can -- though the editors, as working poets, readily admit their choices are idiosyncratic.

Gems here include the best work of lesser-known poets, including several "poets' poets." For example, Edward Thomas, a prominent reviewer in his day and a close friend of Robert Frost's, is represented by "Rain," an absolutely brilliant blank-verse poem which begins:

On this bleak hut, and solitude, and me

Remembering again that I shall die

And neither hear the rain nor give it thanks

For washing me cleaner than I have been

Since I was born into this solitude.

Thomas's poem -- and other treasures here -- introduces readers to what and how poets read to learn to make poems. Of course, many of the usual suspects are found here, but the surprises are exciting, and even the old favorites seem new when the editors explain why and how a particular poem seems beautiful. This is particularly evident in their discussion of Edna St. Vincent Millay's rushing, initially breathless sonnet "What Lips My Lips Have Kissed, and Where, and How, " which reads:

What lips my lips have kissed, and where, and why,

I have forgotten, and what arms have lain

Under my head till morning, but the rain

Is full of ghosts tonight, that tap and sigh

Upon the glass and listen for reply,

And in my heart there stirs a quiet pain

For unremembered lads that not again

Will turn to me at midnight with a cry.

Thus in the winter stands the lonely tree

Nor knows what birds have vanquished one by one,

Yet knows its boughs more silent than before:

I cannot say what loves have come and gone,

I only know that summer sang in me

A little while, that in me sings no more.

In the "close-up" section, Strand and Boland offer an biographical paragraph that mentions that in 1923, Millay became the first woman to win a Pulitzer Prize in Poetry. They then discuss Millay's "distinctive and unusual" approach to the sonnet form: "Instead of taking the more leisurely pace of the public sonnet that had been the 19th-century model, she drove her sonnets forward with a powerful lyric music and personal emphasis."

The editors point out Millay's heavy reliance on assonance and alliteration, and then note how she takes advantage of the different tempos the sonnet offers:

"Here she uses her distinctive music and high diction to produce an unusually quick-paced poem in the first octave and then a slower, more reflective septet where the abandoned lover becomes a winter tree. This ability of the sonnet, to accommodate both lyric and reflective time, made it a perfect vehicle for highly intuitive twentieth-century poets like Millay."

That simple explanation of the sonnet as a form able to "accommodate both lyric and reflective time" helps clarify most sonnets. But Strand and Boland are careful not to explain everything. The deepest beauty, as they explain in their introductory essays on their attraction to form, is built on mystery. And it is that attempt to understand the greatest mysteries that defines the greatest poems.

Similarly, mystery often drives poets to write, as Strand explains in his essay on Archibald MacLeish's "You, Andrew Marvell," which Strand describes as the first poem he wished he had written himself in his early years as a poet:

"Although I no longer wish I had written 'You, Andrew Marvell,' I wish, however, that I could write something like it, something with its sweep, its sensuousness, its sad crepuscular beauty, something capable of carving out such a large psychic space for itself&. There is something about it that moves me in ways I don't quite understand, as it were communicating more than what it actually says. This is often the case with good poems -- they have a lyric identity that goes beyond whatever their subject happens to be."

With this book, Strand and Boland help quantify the explicable parts of a "lyric identity." Understanding form, the editors believe, is one way to begin understanding a poem's beauty. This lucid, useful book is a wonderful guide to that mysterious music. 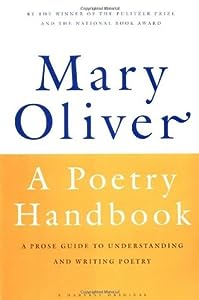 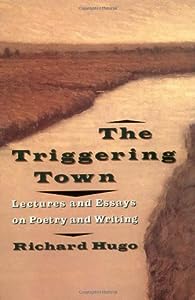 The Triggering Town: Lectures and Essays on Poetry and Writing 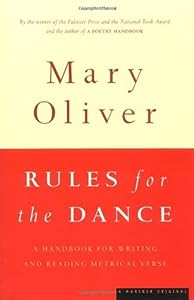 Rules for the Dance: A Handbook for Writing and Reading Metrical Verse 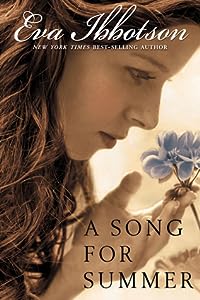 A Song for Summer