Who Regulates Whom? An Overview of U.S. Financial Supervision 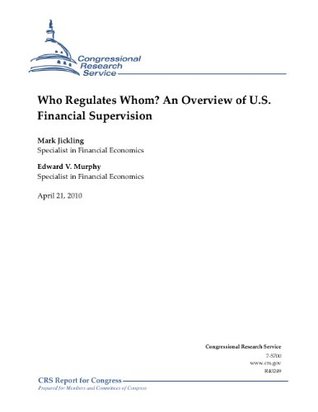 Federal financial regulation in the United States has evolved through a series of piecemeal responses to developments and crises in financial markets. This report provides an overview of current U.S. financial regulation: which agencies are responsible for which institutions and markets, and what kinds of authority they have.

There are two traditional components to U.S. banking regulation: deposit insurance and adequate capital. Commercial banks accept a quid pro quo that was adopted in response to widespread bank failures during the 1930s. Through deposit insurance, the federal government provides a safety net for some banking operations and in return the banks that are exposed to depositor runs accept federal regulation of their operations, including the amount of risk they may incur. Since the 1860s, federal banking regulation has sought to prevent excessive risk taking by banks that might seek to make extra profit by reducing their capital reserves—at the time called “wildcat” banks. There are five federal bank regulators, each supervising different (and often overlapping) sets of depository institutions.

Federal securities regulation is based on the principle of disclosure, rather than direct regulation. Firms that sell securities to the public must register with the Securities and Exchange Commission (SEC), but the agency has no authority to prevent excessive risk taking. SEC registration in no way implies that an investment is safe, only that the risks have been fully disclosed. The SEC also registers several classes of securities market participants and firms, but relies more on industry self-regulation than do the banking agencies. Derivatives trading is supervised by the Commodity Futures Trading Commission (CFTC), which oversees trading on the futures exchanges, which have self-regulatory responsibilities as well. There is also a large over-the-counter (off-exchange) derivatives market that is largely unregulated.

The Federal Housing Finance Agency (FHFA) oversees a group of government-sponsored enterprises (GSEs)—public/private hybrid firms that seek both to earn profits and to further the policy objectives set out in their statutory charters. Two GSEs, Fannie Mae and Freddie Mac, were placed in conservatorship by the FHFA in September 2008 after losses in mortgage asset portfolios made them effectively insolvent. A number of financial markets are unregulated, including some of the largest. No federal agency has jurisdiction over trading in foreign exchange or U.S. Treasury securities; nonbank lenders fall outside the regulatory umbrella; and hedge funds, private equity firms, and venture capital investors are largely unregulated (although their transactions in securities and derivatives markets may be).
The United States has never attempted a wholesale reformation of the entire regulatory system comparable to the 1986 “Big Bang” in the UK, which reorganized regulatory agencies across industry lines and sought to implement a consistent philosophy of regulation. In the wake of the current financial turmoil, however, such a reevaluation is possible, and a number of broad restructuring proposals have already come forward.