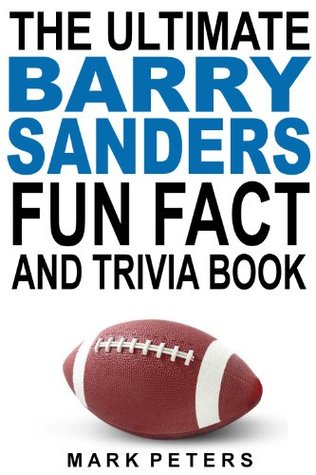 The Ultimate Barry Sanders Fun Fact and Trivia Book contains well over 200 pieces of trivia, little known information, and fun facts about this great pro football star. This is perfect for you if you are curious about your favorite player, want to impress your co-workers, need information for a trivia contest, or even if you want to win a bet or two with family or friends. There are some hard to find tidbits in here including stuff related to his pro days, college days, and even his life away from football. This is exactly what the title says it is, the Ultimate Barry Sanders Fun Fact And Trivia Book.

-What jersey number did Barry Sanders wear in college?

-How many games did Barry Sanders have during his college career where he ran for more than 100 yards?

-Prior to Barry Sanders, how many players had the Detroit Lions drafted out of Oklahoma State University?

-How many yards did Barry Sanders gain in his very first carry in the National Football League?

-Who threw the ball when Barry Sanders caught his very first touchdown pass in the NFL?

-What was the most fumbles Barry Sanders would have in any one season during his NFL career?

-What was the most times Barry Sanders would carry the ball in any single game during his time in the NFL?

-How many yards did Barry Sanders gain in his final NFL game and what team was he playing against?

-How many different quarterbacks threw TD passes to Barry Sanders during his NFL career?