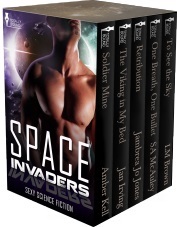 ‘Soldier Mine’ by Amber Kell

When Kreslan is attacked, little does he know the shapeshifting beast who saves him will completely change his life.

When Kreslan Piers is attacked in the cargo hold, he is rescued by a rare shape-shifting beast who transforms into the reincarnated leader of an entire planet. Will Kreslan be willing to give up his dream of being an ordinary soldier to partner with an extraordinary creature?

Vohne has been named by his human half, and the longer they’re together the more he’s remembering the details of their previous lives—lives he shared with Kreslan before watching him die. When they reach the Thresl home planet, Vohne has to break the news to his skittish mate that they not only does he belong to Vohne, but he is fated to be his other half for the rest of eternity.

‘The Viking in My Bed’ by Jan Irving

Wise-talking college student Bailey Moore saves his romantic side for the historical romances he’s secretly addicted to—until he wakes up crushed under six foot plus of sexy, aroused ancient Viking.

Bailey Moore is a cynical, wise-talking college student who saves his mushy, romantic side for the historical romances he's addicted to-until he wakes up crushed under six feet three inches of aroused Viking warrior.

At first he takes Freyr Grímsson as a glorious odd ball obsessed with Medieval role playing-down to his rough hewn sword, but Frey insists Bailey is his guide in this new world and when Bailey is attacked by a mysterious creature, he's convinced that he and Frey have to wage a battle to drive evil forces off campus. But when his Viking conquers him in bed, Bailey is afraid Frey will also lay claim to his secret, vulnerable heart.

Retribution: Is love worth the cost?

Rave Anders lost everything - his job, his lover, and part of his soul. Accused of a crime he didn't commit, it's taken him years to build up a respectable intergalactic transport business. Pulled into a web of intrigue and espionage, Rave is forced to face ex-lover Kain Sims, the one man he no longer trusts.

On a mission for the Alliance, Kain must convince Rave the fate of a world rests in both their hands. Kain needs Rave to help to destroy a deadly weapon before it can be used to eradicate a planet. But that's the easy part; the hard part is making Rave believe he never wanted to leave him in the first place.

Can they save a world and reclaim the love they once shared, in a galaxy of deception?

‘One Breath, One Bullet’ by S.A. McAuley

Face to face, and rifle to rifle. The time and location change, but never the circumstance. Merq Grayson and Armise Darcan are enemies. And neither will be considered successful until the other is dead.

It is the year 2558. A mere decade has passed since the signing of the treaty which ended the three hundred year long Borders War. In the midst of an uneasy peace, the world gathers for the first Olympic games since the war began.

The Rifle competition showcases the very soldiers who fought in the war, pitting former enemies against one another again. Continental States Peacemaker Merq Grayson will once again battle the Dark Ops officer from the People’s Republic of Singapore, Armise Darcan, this time under the flag of their own uneasy truce. The relationship between Merq and Armise is one of violence, secrecy, and a growing intimacy that could have them both branded as traitors.

But there is more at stake than pride or medals in these games. And neither Merq nor Armise may be able to make it out alive before the fires of revolution are set ablaze again.

Can a lab rat whore find love with the servant of his master, or will their different backgrounds and prejudices keep them apart?

In the distant future, where the devastation caused by war has driven the human race below the surface of the Earth, society is split in half. The rich scientists live in towers where they can monitor the surface and determine when the poisonous gasses have cleared and the world is safe for humans once more. Meanwhile the majority of the human race lives in crowded labyrinthine caves, where life is harsh and short. Uneducated and with no real prospects for the future, a 'lab rat' is lucky to live to see thirty years of age. Employment options are minimal and few can escape the fate of choking to death on the dust of the caves.

When AJ, one of the poorest members of society, needs credits for medicine for his sister he is in a desperate situation. With no other options available he risks alienation from his family by selling himself to the highest bidder. Love is the last thing on his mind, but while Blake, his new owner, might not be Mr Right, Ryder, his servant, just might be. Unfortunately, their different backgrounds, prejudices, and AJ's brutal owner seem destined to keep them apart, but true love can be theirs for the taking, if they can only find a way.