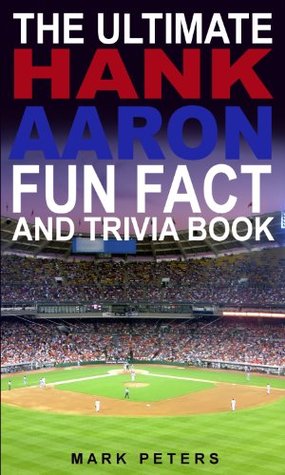 The Ultimate Hank Aaron Fun Fact and Trivia Book contains well over 250 pieces of trivia, little known information, and fun facts about this great Major League Baseball star. This is perfect for you if you are curious about this legendary player, want to impress your co-workers, need information for a trivia contest, or even if you want to win a bet or two with family or friends. There are some hard to find tidbits in here including stuff related to his pro days, minor league days, and even his life away from baseball. This is exactly what the title says it is, the Ultimate Hank Aaron Fun Fact And Trivia Book.

-What Negro League team did Hank Aaron play for and how many home runs did he hit with them?

-Before making it to the major leagues, what two minor league teams did Hank Aaron play for?

-Hank Aaron got his first hit and later his first home run off of the same pitcher in two different games. Who was it and what team was it against?

-What three players finished ahead of Hank Aaron in the voting for the Rookie of the Year Award?

-How many All-Star Games did Hank Aaron play in during his career?

-What was the highest single season batting average Hank Aaron had during his career?

-What Major League Baseball players did Hank Aaron go head to head against in the old Home Run Derby show of the early 1960s?

-How many of Hank Aaron's 755 career home runs were hit with the Braves and how many with the Brewers.

-How many times was Hank Aaron intentionally walked during his Major League Baseball career?