The Monster on Top of the Bed: (Multimedia Edition. Great Children's Picture Book with audio that reads the story--one page at a time in English, Spanish and Italian.) (Suzy and Karrit 1) 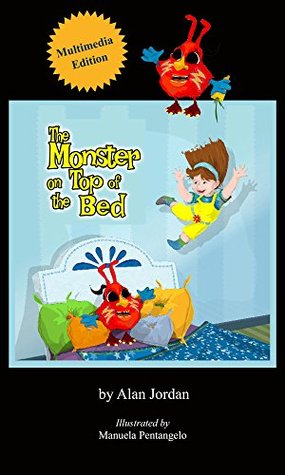 Author's note: This is the same book as The Monster on Top of the Bed (blue cover) that has almost all 4* and 5* reviews, except that it has an additional feature--a link to download the story in English, Spanish and Italian, and several other stories and poems. It is a download everything that is on the CD edition that is frequently used by teachers.

"Blimp, blop, blimp, bloop. Suzy gripped her sheets tightly. Was that noise coming from under her bed?"

So begins Suzy's most magical adventure where she meets Karrit, another child, and one that lives far under her bed. The two children banish their bedtime fears and become best friends by treating each other the way that they want to be treated.

In this beautifully illustrated book we meet two children--Suzy and Karrit, and we discover that sometimes things are not always what they seem and when the monster fears the child, we come to see a different perspective on misunderstandings and ignorance.

We also discover that it is easy to misinterpret the meanings of words and actions, when Karrit explains to Suzy that certain things she says and does, frightens him.

Although the words, "The Golden Rule" never appear in the book, the way the two children treat each other as though they would like to be treated enable the two of them to work together to work out their differences. A friendship forms, and a new light is shed upon them both when they realize that maybe they aren’t so different from each other after all.

When things get scary, both children use Grandmom's mantra, which is highly effective in banishing monsters, "“You’re welcome to stay until I say, ‘Nay!’ Then it’s time to go, and you can’t say, 'no.'”

This is an empowering bedtime story. The multimedia edition contains a link to an .mp4 file that features the same audio tracks in the CD version. Children can listen to the story being read by four narrators who read the story in English, Spanish and Italian. There are page turning sounds to let the child know when to turn the page. There are slight differences between the words in CD version and the Kindle version. Children like the challenge of finding the differences.

In addition to reading the story, the multimedia version also contains bonus material, including an interview with the illustrator, and other stories and poems written by the author.

It's perfect for three to six-year olds, and six-to-twelve year olds (who are sometimes still afraid of monsters) find the story charming and enjoy reading it to their younger siblings.