John Gill's Exposition on the Entire Bible-Book of Haggai 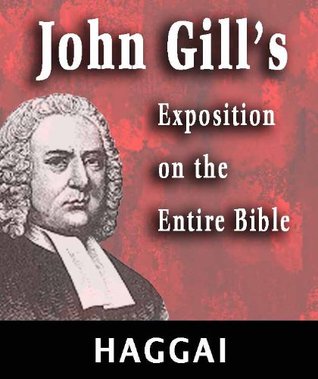 You are about to purchase and download the ebook version of John Gill's Exposition on the Entire Bible-Book of Haggai, for your Kindle or other eBook Reader Device.Instead of downloading John Gill's Exposition on the Entire Bible in its entirety, we have conveniently broken this monumental work into individual books. This allows you to save more free space on your Kindle/other device and makes for faster searches and quicker navigation. We sincerely hope these features will enhance your studies and maximize your reading experience.

In his exhaustive Exposition on the Entire Bible, John Gill follows the traditional commentary style of a short summary of the book, summary of each chapter, and then commentary on each individual verse following up to the next chapter.

John Gill was a forefather of the Metropolitan Tabernacle we now most associate with Charles Spurgeon. Spurgeon, who spent much time reading and critiquing commentaries, is quick to say that he was unaware of a better commentator of the Old Testament. Gill’s greatest asset was his expertise as a Hebrew scholar.

Spurgeon had his criticisms as well. He wrote publicly that Gill used too many straw-man arguments and held loose interpretations of the Parables. Spurgeon wrote,“Very seldom does he allow himself to be run away with by imagination, except now and then when he tries to open up a parable, and finds a meaning in every circumstance and minute detail; or when he falls upon a text which is not congenial with his creed, and hacks and hews terribly to bring the word of God into a more systematic shape. Gill is the Coryphaeus of hyper-Calvinism, but if his followers never went beyond their master, they would not go very far astray.”

But the bottom-line, Spurgeon writes, is that “the world and the church take leave to question his dogmatism, but they both bow before his erudition [learning] … For good, sound, massive, sober sense in commenting, who can excel Gill?”
At another place, Spurgeon considered this commentary “remarkable for the copiousness of its glossary, the brilliance of its argument, his apprehension of prophecy, and the richness of his Hebrew scholarship. His preparations for the pulpit having, as is well known, furnished the materials for the press, we can but reflect on the priceless value of his ministry.”
In other words, the obvious power of his public preaching endures through the press. This was not a man addicted to scholarship, but a man driven by the conviction to preach through the whole counsel of God. His commentaries exemplify what was certainly a “priceless ministry.”

Richard Muller writes of John Gill that he “stands as perhaps the most erudite [or learned] of the eighteenth-century Dissenting theologies in the tradition of the older orthodoxy” (Post-Reformation Reformed Dogmatics, 3:150). “Erudite” being the same word used by Spurgeon.

There seems to be a consensus that Gill’s writings are firmly founded upon solid biblical scholarship. He shows a deep level of understanding with Scripture, allowing the bible to interpret itself. His wealth of insight into the Hebrew language, tradition and culture soaks both the Old and New Testaments. John Gill’s work stands as an testimony of one man’s faithfulness to preach through the entire bible in light of a culture encouraging men and women to judge divine reality through empty philosophical “rationalism.” He was and remains through his works “a star of the first magnitude amidst surrounding darkness” (Spurgeon).