The States and Territories of Our Western Empire: Embracing the History Statistics and Geography of the Territorial Regions of the United States, and of the Principal States and Chief Cities of the West (Classic Reprint) 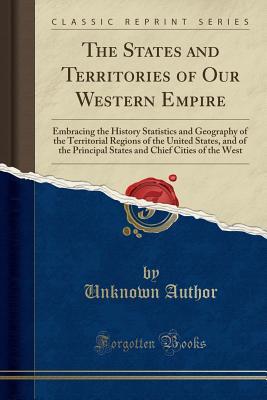 Excerpt from The States and Territories of Our Western Empire: Embracing the History Statistics and Geography of the Territorial Regions of the United States, and of the Principal States and Chief Cities of the West

This territory occupies the extreme north-west portion of the domain of the United States. It is bounded on the north by the Straits of Juan de Fuca (which separate it from Vancouver's island) and British America, east by the Rocky mountains, south by Oregon, (the Columbia river forming about half the boundary line and west by the Pacific ocean. It lies (with the exception of a small bend in the Columbia river) between 46� and 49� north latitude, and between 110� and 125� west longitude; being about 600 miles in its greatest length from east to west, and about 209 in width from north to south, forming nearly a parallelo gram, with an area of perhaps square miles.

Face OF the country and mountains. - The same general description of the surface as given in Oregon will apply to Washington, except that the Blue mountain range is more broken and scattered north of the Columbia river. The principal peaks of the Cascade range in this division are Mount St. Helen's, Mount Adams, Mount Rainier, and Mount Baker. Mount Olympus, the highest peak of the Coast range, has an elevation of feet. Most of these peaks are clothed with perpetual snow. Mount St. Helen's and Mount Rainier have been respectively estimated at and feet elevation.

Minerals. - There has been little opportunity as yet to develop the min eral resources of this new territory. Coal has, however, been discovered on or near Bellingham bay, accompanied by the new red sandstone, which furnishes a fine building material,20 or 30 miles up the Cowlitz river, and in the region about Puget's sound, in abundance. Fossil copal exists on the shores of the Pacific, north of the Columbia river.

This book is a reproduction of an important historical work. Forgotten Books uses state-of-the-art technology to digitally reconstruct the work, preserving the original format whilst repairing imperfections present in the aged copy. In rare cases, an imperfection in the original, such as a blemish or missing page, may be replicated in our edition. We do, however, repair the vast majority of imperfections successfully; any imperfections that remain are intentionally left to preserve the state of such historical works.