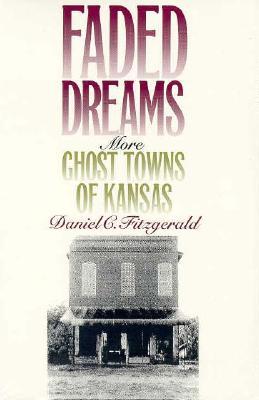 Palermo was a thriving port on the Missouri in the 1850s. Steamboats lined up to load and unload merchandise. Hotels flourished and pleasure cruises came from St. Louis. When the steamboat business collapsed, the railroad came. But the railroad had no depot, and passengers had to flag down trains from the platform. After a few years, the trains stopped coming altogether. By 1904 the post office was gone.

Like hundreds of towns across Kansas, Palermo peaked then petered, leaving behind only a faded image of its former self. Now it's a ghost town-a shadowy remnant of what it once was, says Daniel Fitzgerald. Some ghost towns are completely gone, he says, while others remain as abandoned ruins or foundations. Some even have small populations and community spirit, but none are the bustling sites they once were. All are towns that time has passed by.

Providing an intriguing glimpse into the past, Fitzgerald takes us on a journey around the state--to Goguac and Itasca, routed around by the railroads; to Eustis, loser of the county seat; to Fostoria, booming then busting as a mining town; to Old Clear Water, abandoned when the sun set on the Cheyenne cattle trail; and to Paradise, ravaged by fire during the depression and unable to fully recover. He leads us through Kalida, with too little water, Strawn--now on the bottom of John Redmond Reservoir--with too much, and Quindaro before it was consumed by Kansas City.

Examining why towns declined or were abandoned, Fitzgerald chronicles the births, descents, and heyday adventures of 106 of the more alluring ghost towns in the state. And, for the ghost-town enthusiast ready for a hunt, he supplies current descriptions of these once prosperous sites where the phantoms of unfulfilled dreams linger elusively among the remains.